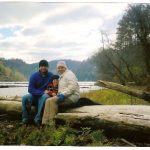 37, Married 15 years, father of one. "Tree Top Flyer", that's my trail name because it's what I do for a living as a US Army AH-64D Apache Longbow Attack Helicopter Pilot. I have been in the Army for 17 years, joining up right after a failed semester of college. I began as an Air Traffic Controller, but decided that flying choppers would be more fun than just talking to them. I was right! Now I'm an Instructor Pilot and love it even more. We have been stationed in AL, TN, NC, GA (currently) and also overseas in Germany, South Korea, Bosnia, Africa, and Iraq (best year of my Army career in Operation Iraqi Freedom III, 2005), OIF VIII and VIIII 2008,09). I grew up in the knobs of South East Tennessee close to the Hiwassee River, Cherokee National Forest, Starr Mtn, and The Ocoee River. Growing up in the sticks without any siblings gave me ample opportunity to become familiar with the woods and mtns in the area. During the Summer, i would be days in the backcountry with a cane pole for a fishing rod and a .22 Rifle. I hiked, camped, bouldered, and climbed rocks without the benefit of gear and was called a Mountain Man by my classmates. I have walked to school in the snow both ways on more than one occasion. These days, I still have that exploring drive in me which is not necessarily shared with the same amount of zeal by my wife but she tolerates me very well and I think she secretly enjoys the hell out of it. When we take leave, "vacation", we spend a lot of time on the trails, hiking and camping. My ideal wish list would be: 1. Hike to Mt Everest Base Camp 2. Thru hike the AT immediately after retiring from the Army. 3. Go West and spend a while backpacking and climbing all these moutains I see in the magazines. I currently have a list of about 10 on my to do list. 4. Earn an Environmental Science Degree