From the Daily Echo in the UK…. 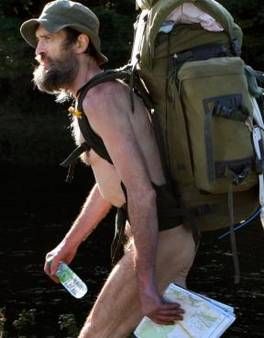 A HAMPSHIRE man dubbed the Naked Rambler has failed in a bid to challenge his latest jail sentence.

Stephen Gough gained notoriety after walking naked from Land’s End to John o’Groats ten years ago – and has since been handed prison sentences totalling more than six years.

The 54-year-old was jailed for 11 months in June after being found guilty of breaching an antisocial behaviour order (ASBO) which bans him from appearing in public with his genitals or buttocks uncovered.

He had breached the order within minutes of being given it at Southampton Magistrates’ Court in February by appearing on the steps of the court completely naked – save for his socks, hiking boots and a small rucksack.

Gough, of Chamberlayne Road, Eastleigh, has now challenged his sentence at London’s Criminal Appeal Court, with his lawyers arguing it was “too long”.